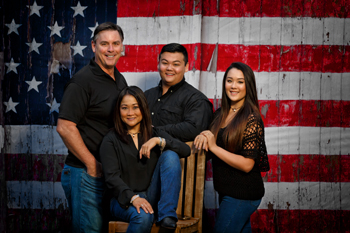 From his youth growing up in Houston, to his college years pursuing his degree in Radio, Television & Film from The University of Houston, Mike has always had a love for photography and films. During his time at U of H he developed a unique perspective and style…..bringing together attributes of photography, television & film production to establish the foundation of his unique artistic style seen throughout his work today.

Upon earning his Bachelor of Arts degree, Mike joined the production crew of “RoboCop 2” and began a career in the motion picture business that would span two decades. During this period, Mike traveled all over the country and many parts of the world shooting commercials, music videos and over 50 feature films & television shows.

As a Dolly Grip, Mike was responsible for the camera’s motion during the shot and worked closely with Directors, Directors of Photography and actors. His visual style and perception was greatly influenced by some of the most creative & innovative filmmakers of our time.

Collaborating with Directors such as Quentin Tarantino on “Grind House”, Wes Anderson on “Rushmore” & Robert Rodriguez on “Sin City” showed Mike the creativity, dedication, and vision needed to succeed as a Director.

Working with Directors of Photography such as David Boyd on “Friday Night Lights”, Guillermo Navarro on “Spy Kids”, and John Schwartzman on “The Rookie” gave Mike the opportunity to learn the intricacies of lighting, exposure, camera angles, lens choice and framing that are the hallmark of the cinematic experience.

In 2007, after 20 years in the motion picture business, Mike decided that he was ready to concentrate on his passion for photography. In 2009, after a couple years of education and training he established HandCrafted Images – Mike Sheeren Photography and hasn’t looked back.

A portrait photographer is both a Director and a Director of Photography. Mike incorporates many innovative techniques and strategies learned from some of the masters in the motion picture business and strives to capture the unique personalities and special relationships of each and every one of his clients. His creative use of lighting, unique camera angles and state-of-the-art equipment coupled with his skillful use of modern image enhancement techniques give Mike the ability to HandCraft a photograph into a one-of-a-kind work of art­­­ you and your family will cherish for a lifetime.